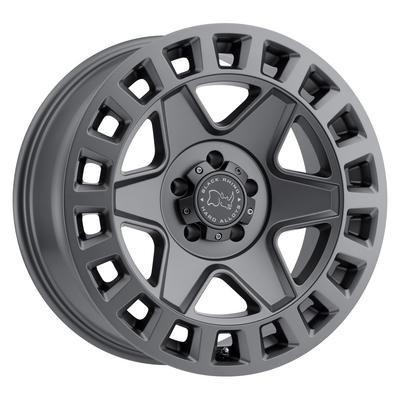 York is a one of a kind six spoke new from Black Rhino. It?s utilizing a fresh new style that shows a performance oriented nature, combined with an undeniable tough precision constructed look that shows both rugged character with sporty style. Six rubbed spokes create raised triangles that point towards the center combined with its outer lip gives the York a unique hybrid personality of speed and toughness. The cut-through lip pattern adds a nice texture reminiscent of the hollowed out features common in race bred machines. To cover the full range of stock and lifted off highway vehicles, York off road rims are available in 17X8, 17x9, 18X8, 18x9, and 20x9 sizes. Offsets range from -12mm to+52mm for five and six lug bolt patterns. York truck wheels are featured in two finishes that show the wheel off, including a stealthy matte black and a sporty matte gunmetal. Wheel Size: 18x9;Bolt Pattern: 5x5;Backspace: 4.5;Offset: -12;Max Load: 2250;Hub Bore: 71.6;Finish: Matte Gunmetal; California Residents: WARNING

TORONTO, Ont. - Rand McNallys DriverConnect ELD platform is not working, following a cyber attack affecting the companys hosted and network systems. It is instructing affected fleets and drivers to use paper-based logbooks until the systems can be restored. A timeline to restore services is not yet available. The news emerged in a notice distributed […]...
>Read More

TORONTO, Ont. - Wendell Erb, president and CEO of Erb Transport, has been named chairman of the Ontario Trucking Association (OTA) and begins a two-year term at the helm. Erb, who succeeds One for Freights David Carruth in the role, has served for several years on the associations board of directors. In 2011, he took […]...
>Read More

The importance of a strong finishing program

TORONTO, Ont. - Carriers that hire entry-level drivers need to provide additional training, document it, and continue monitoring their performance after putting them on the road. Companies that dont employ a strong finishing program, or cant prove it, can find themselves without insurance or worse, causing a crash and fending off nuclear verdicts. The Truck […]...
>Read More

SAINT-LAURENT, Que. - Andy Transport is relocating its head office from Salaberry-de-Valleyfield to Saint-Zotique, Que., answering needs associated with a growing business. When we purchased and moved into the Salaberry-de-Valleyfield terminal in 2011, Highway 30 did not yet exist, and Andy had merely a fleet of 50 trucks. As the company grew rapidly and the […]...
>Read More

Operational costs of trucking fell in 2019

ARLINGTON, Va. - There was a significant decrease in the operational costs of trucking last year, the American Transportation Research Institute (ATRI) said Tuesday. The average marginal cost per mile incurred by motor carriers in 2019 decreased 9.3% to US$1.65, ATRI said in its 2020 update to An Analysis of the Operational Costs of Trucking. […]...
>Read More

ARLINGTON, Va. - U.S. for-hire truck tonnage dropped 6.3% in October, according to the American Trucking Associations (ATA), and was down 8.7% year-over-year. The sharp drop came after a 5.7% increase in September. While there are indications that the economy is losing momentum, I believe Octobers tonnage softness was more of a seasonal issue during […]...
>Read More